Jukebox James (Born "James Cyrus Jewel") a unique pony unlike any other. Due to the fact that he loves music as much as Vinyl Scratch, he's also considered a party pony just like Pinkie Pie. He's also called "Double J" "Jukebox" or "JJ" for extra musical zing. Living on his own in ponyville away from his parents and is very wealthy. He's a talented singer, dancer, rapper, guitarist, and amateur DJ, giving himself the nick name BEATZILLA. He spends some of his time as a delivery pony delivering food or new appliances for the pony folk but most of the time, He hangs out with his friends The Dazzlings (reformed) to work on music or get an inspiration. He also represents the element of forgiveness even though he's very sensitive. He also has a special watch that can do just about anything. Invisibility, phone calls, scanning, compass, anything he can think of.

JJ and his sister were having so much in a park in Mandehattan playing catch until Lexi threw the frisbee too hard and made JJ run into a tree. JJ blacked out and a tarantula came crawling down from it's web and on to his hand. When Lexi rushed up to him the little spider bit the unconscious JJ and escaped in fear. Once they got home, JJ felt dizzy and woozy after being bitten by a Tarantula, think that it was some sort of poisonous venom. JJ fainted again and all the spiders DNA rushed to his veins thus giving spider powers. He then noticed the bite after 3 hours of unconsciousness and suddenly a web line came from his wrist which surprised him. From that day on, JJ began follow the footsteps of Spider-Man

Due to the determination and hard work James put through, he decided to time himself on how fast he can get a job done in a snap

James visited a polar region one day and while having a snowball fight with his sister, he decided to take it up a notch and learn how to throw ice and snow using telekinesis

During his time in Canterlot, James was pretty desperate of finding a new abilities to learn. So he went to Princess Celestia to help him and the decision was clear

In Equestria as the element of forgiveness. He never realized how hard it is to control Equestrian Magic. Twilight Sparkle kindly showed him the ropes and now he's a master at it

James is actually outgoing with every being in the world; Even fairies. Tinker Bell gave him a pouch of Pixie dust as a goodbye gift for visiting Pixie Hollow

James feels like nothing can hurt him and thought to make himself revive again and again. So, he traveled around the world and Equestria to learn how to heal himself and others when they're too weak to battle again

Out of all the magic he's learned, James taught himself how change his wardrobe without heading to a fitting room

Through the magic of Friendship, JJ can morph into any Power Ranger in existance

Sometimes James likes to have fun by tickling his friends but Pinkie Pie and Sonata Dusk are the only ones he finds to be the most ticklish. He on the other hoof gets tickled to.

Ponies who got tickled By James

As a kid in the mirror world, he was picked on by millions of people at school just because he had various super powers. They use to call him "Daddy 8-legs", "Freezer Freak", "Speedy Weakling" but the most common one was "JERKBOX JAMES". These names came mostly from The "Bring Down Brigade" Whrilagig, Sea Angel, and Swift Jet; 3 of the most popular kids in school, talks with other "Populars" but always talk insultively to the "Unique, Unpopular or Weird" just because they're different. They believe the everyone should be a normal everyday person NEVER DIFFERENT (It's basically a school tradition for them) but his family loved him just the way he is.

During his young age days, James has been to different places during his family vacations and learned new abilities. His dad always says to him a stronger man stands up for others; Even if they're in danger. Right when Travis said that to him, he decided to ask his mom if he can travel on his own with his brother Emerald Storm for a few minutes. When she approved it, he used his watch for making a portal to different worlds. He and emery had a blast visiting world by world and meeting friendly folks unaware that he got bitten by a tarantula along the way. (THIS DOESN'T MEAN HE JUST GOT SOME FRIENDS NOW, HE WAS STILL PICKED ON BY THE KIDS) until when they got back with their parents, Emerald noticed a note and a bunch of going away gifts from the people he and James met. As Emerald was finished reading the note, James made a solemn vow saying that he'll use these abilities for good and not evil.

Grown-Up and Running Away

Growing up, was very difficult; He was a hard working janitor earning $1,000 a month. His dad on the other hand (Or hoof) started caring only about himself as James turned 16 and wants to keep all the money that Jame's earned to himself (Since this is child based, I decided not to tell you what REALLY happened with James's Dad). Devastated by his father's behavior, he decided to move out of the house, Take all his money back and live on his own. He Stumbled into a portal from the mirror world to Equestria. He finds himself in Canterlot (No Pony in sight) and then begins to start walking to find his new home until he stopped at the train station for extra transportation help.

Months went by and James was helping Pinkie Pie helping her foal sit Pumpkin Cake and Pound Cake. Once the parents came home, he told her, and the cakes mom and dad that he was homeless. Needless to say, everypony was shocked that all this time he's been living here without a home. So Pinkie was kind enough

to have Twilight Sparkle, and the others to make a little home for him. Rarity Made some fancy touches, Rainbow Dash made his bed room "Awesome" and Applejack made a special kitchen with lots of surprises and nourishment.

While he was in ponyville, James was outside behind Twilight's castle practicing his super abilities on a obstacle course he made himself when Rainbow Dash and the others was watching undetected. When she saw that first web line, she was amazed, but when she saw all the magic he got and flight without wings, she was shocked. The others (Except Twilight, Spike, Starlight and Fluttershy. They were in Canterlot to talk to Celestia and Luna about him) forms a town meeting with everypony and when Pinkie spotted him in town (he investigated what the comomtion is about) they ran him out of equestria just because he's different. Once he was gone, the mane 5, had a "good riddance" party for James for being a "Super Zero" (In the words of Rainbow Dash). Twilight and Fluttershy asks where James is and once the truth was out, They set off to find him. James comes back to Ponyville and Rainbow apologizes for accusing him and didn't realized that being different is part of who sompony is. James accepts the apology and gives everypony a group hug

A few months later after a battle with Lord Tirek, Princess Celestia, Granted him the title as element of forgiveness; helping ponies to change their old ways and make new friends (Focus on the future, Not The Past).

At the age of 15, James attended Canterlot High for the first time. He felt

worried and apprehensive thinking that the insults will come back to him but without warning, THEY DIDN'T. James was the new kid on the block some people say; stitting all alone in the cafeteria, looking at people making sure they don't notice, and talking a little quiet (Basically, he's got the Fluttershy Feeling). Rarity, Fluttershy and Pinkie Pie were the first ones to notice him when they heard him in the band room alone Rapping about his past. He was later introduced to Rainbow Dash, Sunset Shimmer and Applejack by the others during lunch when he was alone again and now he's feeling a little more comfortable.

He can be a lot of fun most of the time. He's energetic, helpful, caring, loving, mild tempered (never vengeful), a little jumpy, a little clumsy (NOT TOO CLUMSY), protective, hard working and very sensitive (Tears up when friends start arguing MOSTLY).

Living in Equestria and visiting the Mirror World from time to time, James sometimes gives nicknames to most of the friends he's made so far

A. He Invites the elements of harmony with the princesses

B. He finds his personal Photographer is Photo Finish

and C. He Sometimes builds an after party with Pinkie Pie 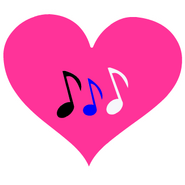 James Congratulating his sister on getting her cutie mark 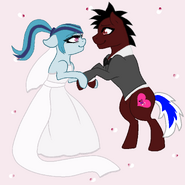 Sonata and James Get Married 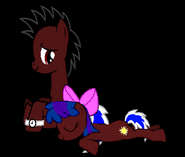 Jame's with his daughter and siblings

James and his little Sister 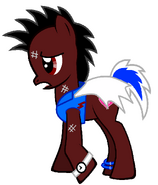 "Maybe I can find some friends" 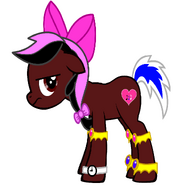 "I'm gonna get you for this Lexi"

Jukebox fires Pinkie out of her cannon

Jukebox and Pinkie have a cooking plan

Camping with Sweetie Belle and the Apple Sisters

Jukebox getting thrown off the bed 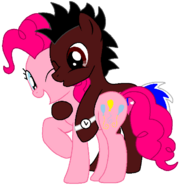 Jukebox and the others at the Grand Galloping Gala

"Who wants a new Flugglehorn!?" 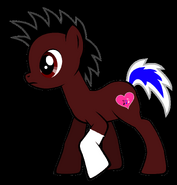 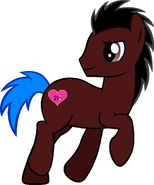 JJ and Sona'ts Beach Date with support from Adagio

JJ and his pals on the Luxe Deluxe

Comfort from Fluttershy and Applejack

JJ with the Mane 7

Trixie's Magic Show with her pals 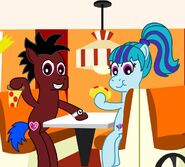 JJ and Sonata having a Pizza Picnic 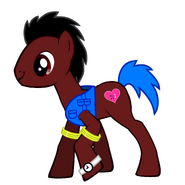 Sonata, JJ, and Adagio together 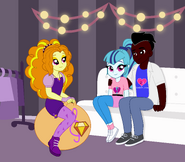 Getting ready for Act 02 of their concert

what a beautiful night

The lovely couple on Nightmare Night

JJ and Sonata on Trampoline

Fist Bump!
Add a photo to this gallery

Retrieved from "https://mylittlebrony.fandom.com/wiki/Jukebox_James?oldid=28910"
Community content is available under CC-BY-SA unless otherwise noted.